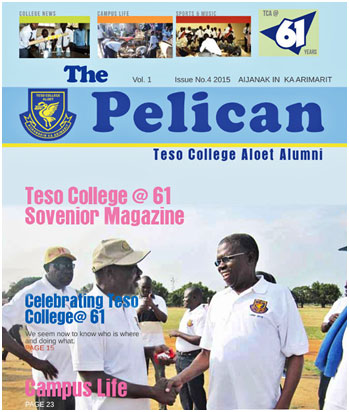 The Teso College magazine, The Pelican, dates back to 1960.
A new issue was released in 2015, covering the 60th anniversary celebrations and commemorating TCA’s blend of history and hope for tomorrow. Selected articles from past issues were published, as well as new writings from TCA staff and students.
The best students of 2013 and 2014 were recognized and we caught up with the lives of the Old Boys and Alumni Association.
The Pelican is put together by the members of the Writer’s Club. The editorial team for this edition consisted of the following:

An Interview with Oguro Anthony, Patron of The Pelican

How long has The Pelican magazine been around?

The Teso College Aloet magazine, also known as The Pelican because of the symbol on the school logo, was reintroduced in 2011 after the publication of the last edition in 1974. The purpose of The Pelican is to keep the students, staff members and community abreast of events that are going on in and around Teso College Aloet annually. We have so far published the 4th Edition of The Pelican magazine, with articles not only from the members of the writer’s club and other students, but from the school administrators and the Alumni as well.

Who receives The Pelican?

The Pelican magazine publishes 1,000 copies annually. The magazines are sold to members of the public, the alumni and students of Senior One and Senior Five. The remaining copies are sold to the staff and continuing students at a subsidized price.

Where does the magazine get its funding?

The school administration is the main funder of The Pelican magazine. However, after income from magazine sales has reached 10,000 Uganda Shillings, the money is used to improve the quality of the magazine for next year.

What makes a good story for The Pelican?

We publish messages from top school administrators as to the current state of Teso College Aloet, including, but not limited to, academic performance in the previous year and spiritual messages from both the Catholic and Anglican chaplains. We also run profiles on our Alumni─some of whom have made tremendous contributions to life in our country and beyond. Students write about college life, current affairs and messages from Clubs and Societies.

How do you come up with story ideas?

Members of the writers club make an announcement during assembly for all students to participate in writing articles. The student editorial team selects the best articles from all categories. Then they forward the articles to the patron writers club, which, together with the teachers of English language, selects those that are fit to be published. As for the school administrators’ articles, the patron, together with the teachers of English language, edits those for minor errors before publication.

Do you run contributions from readers and/or freelance writers?

Currently we rely on students and the teaching staff for articles; however, we also contact particular Alumni whose outstanding contributions to the public deserve documentation.